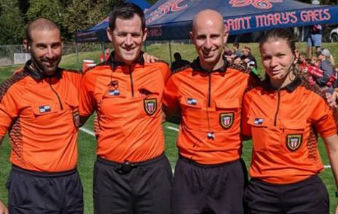 New Mustang Soccer head of referees Justin Yarkin is no newcomer to the club. He grew up as a Mustang player from U10 to U16, even officiating his first game at the young age of 12.

In his new role, Yarkin, 35, will oversee about 1,100 referees during an action-packed Mustang season composed of 1,200 games. He handles recruiting, training and assigning.

“It’s pretty cool,” Yarkin said of his important job. “It’s a lot of work, but I think it will be a good opportunity to kind of put my mark on the club, be able to share all the stuff I’ve learned over 20 years reffing. I got my start here, so it’s kind of nice to see it full circle.”

Yarkin was seemingly born into officiating. Consider all the yellow cards hanging from his family tree. His dad, Mark, and brother, Brent, were also referees, and all three Yarkins would officiate games together. Additionally, Justin’s mom was a Mustang Soccer assigner.

“I had a lot of support,” said a chuckling Justin of his family.

An accomplished referee, Yarkin has officiated Division I college, PDL, USL, U23, adult, and high school action at the league and section levels. He was a National Candidate in 2014. He even officiated junior varsity soccer games as a Monte Vista High student.

Mustang Soccer has played an important role in his life.

“I wouldn’t have had the referee career that I had, and still have going in some areas, without the support that I had from Mustang,” he says  “I came up with T.C. King and Gary King, and it was like a second family for me. Every weekend I was doing soccer stuff for Mustang, I really liked that. That was a positive point in my life, so I just want to be able to give other referees that opportunity.”

When Yarkin started out as a referee 23 years ago, he quickly realized that the role suited his personality – even though it required having a thick skin.

“I was 12 years old and I threw a coach out my first year,” he recalled. “And then I had the referee director come out to my next game when he put me on with that team, and I had an adult supporting me on my decision, and then I was just hooked as a referee.”

After high school, Yarkin was a Grade 7 referee and moved up to Grade 5 in college in San Diego. He went to Washington, D.C. and got some more experience before returning to the Bay Area about 5-6 years ago and did games for Mustang again. His parents live down the street from the club, so it was convenient for a him to do a game and visit family afterward.

He knows referees need to be flexible and read the games properly. Learning proper positioning is important too.

“The real nice part about reffing is it’s an art and you kind of figure it out,” he says. “You figure out when to call certain fouls and when to not, when to kind of read the game. Most referees when they get to the higher levels, they generally look at it as an art rather than just a science.”

Photo: Yarkin is on the left.