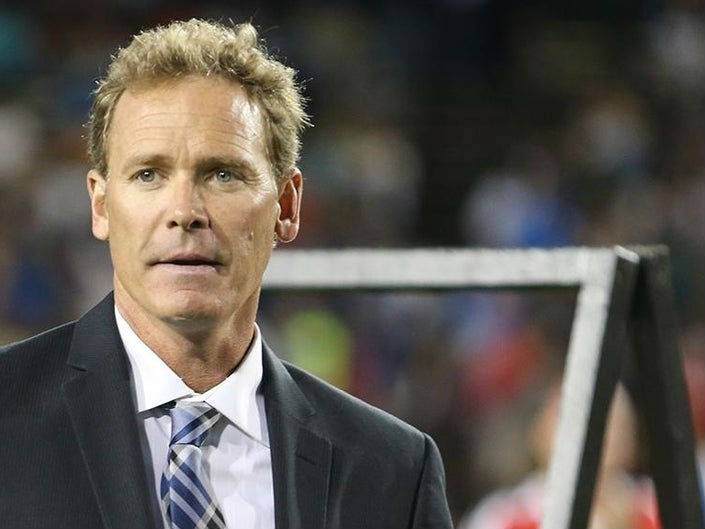 Mustang Soccer Director of Coaching John Doyle, whose storybook career personifies the American soccer experience, has been inducted in the San Jose Sports Hall of Fame at the SAP Center.

"It's a great honor. Makes me think back to the people that helped me along the way; coaches that were mentors to me … I would say I've had a charmed life," the 53-year-old Doyle said during an expansive interview this week.

When you add up all of Doyle's accomplishments and his lifelong commitment to youth players, his soccer career seems unparalleled in Northern California.

A 6-foot-3 center back with an attack-minded style and a sweep of blond hair, Doyle was a man for every challenge. His career spanned over four decades as a Fremont Celtic and Washington High-Fremont star, USF All-American, San Jose Earthquakes captain, U.S. National Team mainstay (1987-94), Quakes assistant coach, Quakes general manager (2008-2016), media voice, and camp organizer.

Still active as a soccer ambassador, Doyle, who also played professionally in Germany and Sweden, and business partner Fred Wilson recently ushered in a first-class soccer facility at River Islands, a master-planned community in Lathrop. The site boasts six Bermuda grass fields, state-of-the-art goals, lights, and has quickly become a hotspot for tournaments and training.

A 6-foot-3 center back with an attack-minded style and a sweep of blond hair, Doyle was a man for every challenge. His career spanned over four decades as a Fremont Celtic and Washington High-Fremont star, USF All-American, San Jose Earthquakes captain, U.S. National Team mainstay (1987-94), Quakes assistant coach, Quakes general manager (2008-2016), media voice, and camp organizer.

Still active as a soccer ambassador, Doyle, who also played professionally in Germany and Sweden, and business partner Fred Wilson recently ushered in a first-class soccer facility at River Islands, a master-planned community in Lathrop. The site boasts six Bermuda grass fields, state-of-the-art goals, lights, and has quickly become a hotspot for tournaments and training.

"Mustang, I would say, is like a warm blanket," he says. "I trust the people there. I'm really, really proud of the club and how we behave and the culture, and then River Islands, to have six world-class soccer fields and then bringing people from all over the country there to play on the fields. I've designed it so it's top level. It's a next-level thing. What we have out there, I would have loved to have had with the Earthquakes when I was a player. It's no different from Danville, or the facility in Danville."

During his time as Quakes GM, the club reconstituted in San Jose and rolled out Avaya Stadium, the first soccer-specific stadium in Bay Area history and won a Supporters' Shield in 2012. He takes pride in bringing in a practice field and working with ex-head coaches Frank Yallop and Dominic Kinnear. Even though Doyle and the club parted ways in 2016, he still gives the team his full support.

"It's like a family to me, those people down there," he said. "I was a player there, then a coach. I did television there, then I was a general manager. It went by fast, but I know everybody down there in San Jose from those years. … I have a great relationship with the general manager (Jessie Fioranelli), John Fisher, Dave Kaval, who's now with the A's. All those relationships with those people. Mike Crowley, he's coming to the (Hall of Fame) dinner. These are all people that treated me extremely well and I enjoyed working with. Lew Wolff was also instrumental in my time as GM.

"I love the team down there and want them to do well."

Doyle was a founding member and captain of San Jose's Major League Soccer franchise, the Clash, in 1996. He played in the first game in MLS history and was named the first MLS Defender of the Year. Doyle and his wife, Kaarin, have been married 30 years and raised two grown children, Jay and Kate.

His connections in San Jose run deep, with the MLS Inaugural game representing a major catalyst.

"What a proud moment to get to play that in San Jose, the first game in MLS soccer, and to see the city of San Jose come alive and the fact that (MLS) chose San Jose because they knew (club president) Peter Bridgwater could put on such a show," Doyle recalled. "Peter did such a fabulous job, and then we win 1-0 at the very end and we get to celebrate winning. We had a great season that year."

Doyle marvels at the growth of MLS over the past 23 years. For a guy who didn't have a major U.S. pro league to return to early in his international career, when there was barely any media coverage for soccer, Doyle now loves seeing league highlights on ESPN Sports Center and videogames that showcase soccer's megastars.

Internationally speaking, Doyle earned 53 caps with the national team. He started in the 1988 Olympics in Seoul, South Korea, scoring in a 4-2 loss against the then-Soviet Union. He also helped the U.S. team beat Canada 3-0 in Olympic Qualifying in 1987, after being called up to the squad follow the team's 2-0 loss to Canada.

Another career highlight was Doyle's goal in a 2-0 win over Mexico in the 1991 Gold Cup. A closet center striker, a position he played proudly in high school, Doyle often saved his widest smiles for times when he pushed up and scored.

"Like every young kid you grow up wanting to be a forward and wanting to be a star and score goals," he said with a grin. "Deep down in my heart I wanted to go up and score goals and be creative and all those things, but probably more in my DNA was to work hard and fight and not let someone get the better of me or the team I was on. I didn't want to lose."

Asked to reflect on indelible experiences on the international stage, and Doyle went back to the 1990 World Cup in Italy. He was standing in the tunnel with his U.S. teammates, among them Tony Meola, John Harkes, Tab Ramos, and Paul Caligiuri, at Rome Stadium preparing to walk out to face host Italy, a daunting proposition on any field. That's when Milan superstar Roberto Donadoni set an Italian trap.

"There was about 90,000 people in the stadium, and (Donadoni) was like 'No, no go ahead, it's OK.' I thought, man, this guy is super nice. Well, they were waiting for all of us to go out so we could get jeered by the 90,000, waving flags. I remember the sound of the flags and the jeering walking out onto the field." Then Italy's players walked out individually, each one receiving a massive roar."

Also being inducted in the San Jose Sports Hall of Fame are John Dunning (volleyball coach), Seana Hogan (cross country cyclist) and golfing legend Juli Inkster. Each inductee will be recognized with a bronze plaque permanently installed on the concourse at the SAP Center in San Jose, among the 114 South Bay sports icons.

A Q&A with Doyle touched on a variety of topics:

Q: The U.S. national team back in your day fought hard as a massive underdog in the World Cup. How did the players right out of college deal with that?

Doyle: "There wasn't as much coverage in America about soccer, so you didn't know what you didn't know, right? You'd play Italy and it wasn't like I'd know all the Italian players and was following them on television or the newspaper. You'd play against the Brazilians. You'd play against the English, the Spanish, the Portuguese, I didn't know who they were, and I didn't really care. I knew we had to try hard and that we were always going to be a little bit of an underdog, so if we worked extremely hard, we'd have a chance. I say that to the kids now. I have some good little teams in Danville, and I'll say, 'You guys are better, but you have to work harder and that's the great equalizer, and then your skill and your talent will take over.'"

Q: People overlook the fact that the national team topped the region, even though it went 0-3 in the 1990 World Cup group stage.

Doyle: "We had to be able to beat Trinidad & Tobago, Jamaica, Costa Rica, El Salvador, Guatemala, Honduras, Canada, and we did. We beat all those teams. We got to a point when we were the best in our region. That was through hard work and determination. We didn't have a league to go back to. We didn't have a club to play in. We were together all the time, so it was a totally different thing back then."

Q: What events catapulted him in youth soccer?

"One was being 13 years old and going to Germany. Our coach was Gerald Voit. Seeing soccer at a high level there. Seeing German Bundesliga games was (eye opening) … And then going home and seeing the North American Soccer League, seeing Franz Beckenbauer, Pele, Johan Cruyff, all the teams coming to San Jose, and going to a Quakes game. I loved going to Quakes games as a kid."

Q: Talk about your close relationship with the Kinnear family. You and Dominic, a former San Jose player and coach and current L.A. Galaxy assistant, were teammates on some great Fremont Celtic youth teams, coached by Hugh Kinnear Sr.

Doyle: "The Kinnear family are my great friends. The father (Hugh) was a huge mentor to me, a great man, my coach. Dominic and I are buddies. He was in my wedding."

Q: Talk about the support you received along the way from Mustang and others.

Doyle: "With Mustang Youth Soccer, the Board, the people from Danville have always given me the freedom to do other things with the Quakes. I've had a lot of people along the way do that for me. (Legendary coach) Steve Negoesco at the University of San Francisco, he would say, 'Hey John, the U.S. National team is better for your growth,' and he let me play with the National Team instead of holding me at USF."