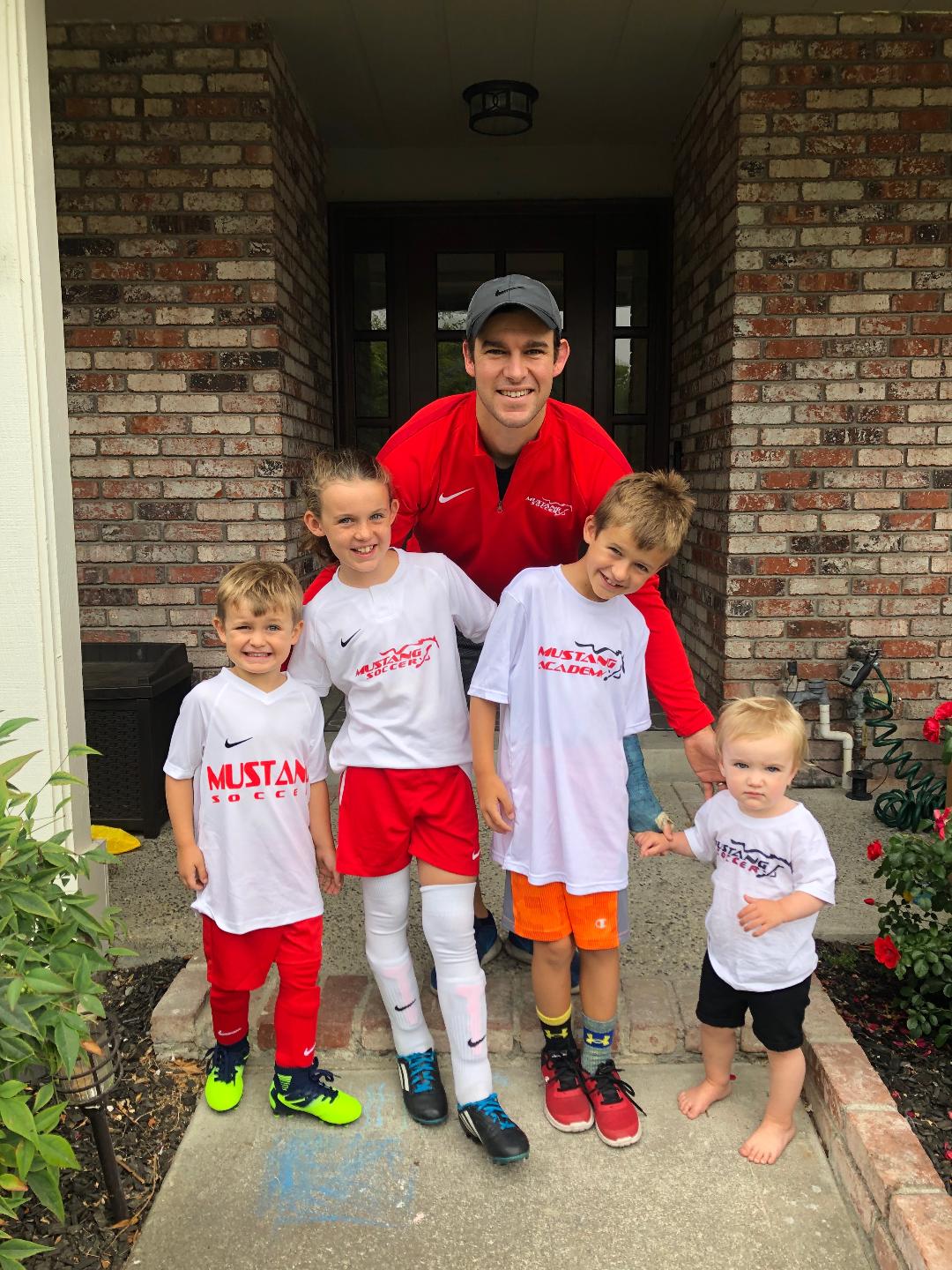 The bustling Bartlett family of six is not only active in Mustang Soccer, but it also adds a hearty slice of Stanford tradition to the mix.

Mark Bartlett, a U10 Competitive Premier coach, and his wife, Melissa, are both former Stanford soccer players. Melissa and Mark met in the preseason of their freshmen seasons with the Cardinal about 16 years ago, and a storybook soccer romance was born.

Today, the all-Cardinal couple has four children, from age 2 to “almost 10,” Mark assures, three of whom play in Mustang: Riley, Jackson and Cole. “We all love soccer,” said Mark, a native of Wellington, New Zealand, of his picture-perfect family. Moreover, the Bartletts love being in the Mustang family. “Mustang has a great mix of people who are passionate about soccer as well as having experience at a high level of the game,” says Mark, who has coached at half a dozen different clubs over the years, including a number of games against Mustang while coaching for Palo Alto Soccer Club.

As a Stanford player, Mark was a four year letterwinner who featured primarily as a center back and was a team co-captain during his senior year. He was described on the Stanford website as a “capable defender with exceptional ball skills … Brings a wealth of international experience to The Farm.” Meanwhile, Melissa (then Mimi Yuhas) served as a midfielder on the Stanford women's soccer team, playing alongside current US national team players Christen Press and Kelley O’Hara.

Now the Mustang kids are benefitting from that experience. In terms of teaching the sport to youngsters, Mark has found that some learn “very well” when they have something described to them in a lot of detail; others learn better through trial and error. “Generally doing things right and wrong in a game, in a situation that’s as realistic as possible, is the best way to learn,” he says. “A lot of times I try and plant the seed of how you might do something and then kind of let them figure it out. Give them a little guidance, here and there. I think ultimately they’ve got to practice it and be put in the right situations to learn.”

In his native country, Bartlett was a 2004 graduate of Kapiti College and captained his high school team. He was a member of the New Zealand Secondary Schools team that toured Europe in 2004 and notched a historic 1-0 win over the English Schoolboys. He also played for the U-17 New Zealand national team.

At Stanford he was a chemistry major and ultimately went on tocomplete a PhD in organic chemistry. He is currently a research scientist in the medicinal chemistry department at Gilead Sciences.Melissa enjoys chasing after their two year old daughter Hannah during the week and also works as a family and newborn photographer, running her own business: Melissa Bartlett Photography.

Back on The Farm, it was only natural that players like Mark and Melissa would meet and become friends. They trained in the same place as highly dedicated student-athletes, after all. Melissa played at Stanford after starring in soccer and cross country at Campolindo High.“We were friends really before we started dating, but yeah, most of the teams knew each other pretty well and would hang out a lot, so we’ve had a few soccer couples over the years. It’s not uncommon,” Mark says.In reflection, Mark credits Melissa and his time at Stanford with shaping the “person I am now. It’s a phenomenal place to be as both an athlete and a person.”

And Mustang Soccer is in a better place thanks to an abundance of Bartletts on the field.